In this session, you will learn how Intuitive Surgical started its order to cash transformation to build a world-class global finance shared services function.
WATCH NOW 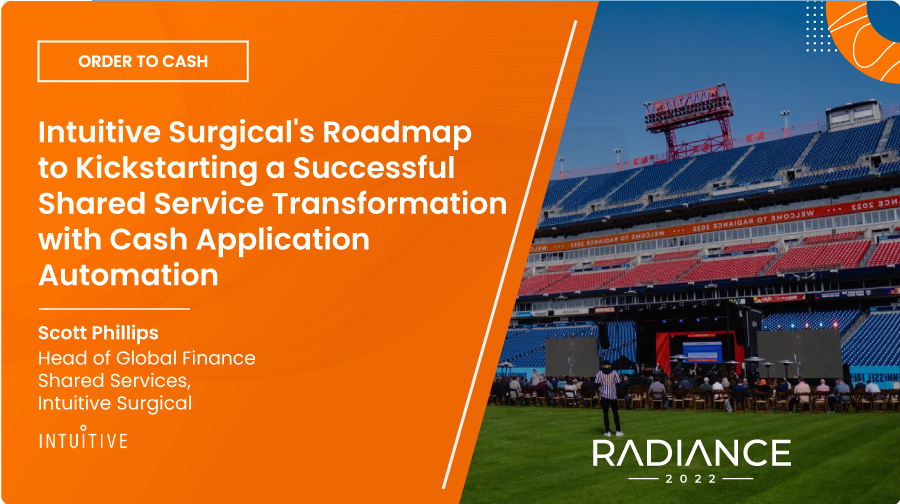 Scott Phillips [00:05]
All right, good afternoon, everyone. Hope everyone’s having a great day. In joining the radiance conference, I’m excited to be back here. This is my fourth radiance conference intuitive or excuse me, a HighRadius always does a great job of putting on an awesome networking event for everyone. Hope everybody’s taking advantage of that. So let’s get started talking about tiny little about intuitive first. And in our Cash apps journey, so super excited to share this. It’s now we like, we’re calling it the award-winning Cash Applications implementations. It’s we just won an award for it. So we’re super pumped and super excited and ready to go party tonight and celebrate. But let’s, let’s go through this and tell you guys what we did and how we think that we were successful. All right, before we jump into the actual project, and Cash Applications, let’s say a little bit about intuitive not a lot of people may not have heard of us yet. But Intuitive Surgical is a pioneer in assisted robotic surgery. So the primary product that we make is called the DaVinci Robot system. So it’s it’s a think of like a cockpit, the doctor actually sits into it and puts his fingers into these little gloves. And every little tiny movement, he does control these arms and actually performs the surgery on the patient. And so it’s, it’s an exciting industry to be in and growing rapidly. So we’re right now we’re a $5 billion company, targeting 6 billion and looking forward to growing in the future. We have a DaVinci system in 67 countries. And we hit an exciting milestone this year and with crossing 10 million procedures that have been performed with the DaVinci system. So it’s really cool organization very easy mission to get behind it. And what we’re doing as an organization, really over the last five to seven years, Intuitive has been kind of in the hyper-growth phase. So it’s been growing at double digits every year. And everybody’s been like super excited and focused on getting the product to market and getting more physicians trained on how to use it. And, of course, you’ve probably we’ve all heard the stories when you have organizations like that, that experienced growth really fast. You look up one day and say, oh my gosh, we’re a $5 billion organization. And but now all the customers are starting to complain about their statements and vendors are not getting paid what’s going on. And you get back and take a look at it. You’re like, oh, well, we forgot about the support functions, right. So everything’s like heavy manual. And our you know, our teams are getting stretched with the workload and the daily grind. So that’s why I was hired to intuitive in July of 2020. The organization realize that, so it’s time to start pulling all this together and building a shared services organization. And we’re starting with finance. So off the bat, in our service catalog is OTC B2B, Global Payroll, T and E, and some other functions, some GL functions and fixed assets that we have in there as well, that tells you a bit about the company and kind of where we are as a, as a shared services organization. Just getting started here and building out the team and our automation journey. All right, before we move into the project, we’re going to start right off the bat with a poll question. I think we’re gonna do so hands, right. So what is the biggest challenge your organization is facing in your current Cash Applications process? Multiple remittance formats? I can’t figure out how to get them all posted. Okay. Couple. They’re expensive lockbox services. No, nobody has expensive lockbox services? We did. I’ll tell you about them in a minute. And manual exception coding, is that an issue for anyone? Okay. Got it? And then what about lack of visibility? Reporting? Can you see what’s going on with your Cash Applications really understand it? Okay. So it looks like the coding was that was the big one there. All right. So here are the some of the challenges that we had, and will line up really nicely with the poll question there. So for the finance, finance functions, some of these, the faster growth that I was talking about, that we’ve experienced, led to these challenges. So we had, again, a number of manual processes, specifically Cash apps all through the OTC process, just a great people, great teams, but heavily manual and struggling to really keep up with the growth that the company’s seeing. And it’s not just the growth of the organization on the sales side, but that that is really driving the transaction volume. So we’re seeing it even I’ve been here almost 18 months, and it’s just content, which is a good story, good problem to have. But it’s every quarter, every month, it’s more and more transactions and how do we keep up with that? And how are we going to be able to ensure that we’re able to absorb this going forward?

Scott Phillips [13:56]
Alright, so here’s the title of the presentation, why did we start with Cash Applications. So number one, we thought that we would be able to improve the service of our customers. So I mentioned the complaints we were getting from our customers, so that was going to be addressed. And that’s also in line with our vision of being customer service focused, and would also decrease the heavy manual workload that we had on our teams by being able to move that increase the automation rate and move that manual work to an automated tool. We also felt confident in the solutions that were available in Cash apps. Fortunately, it had previous experience with HighRadius. So this is my second time around. And having had experience with the tool, I knew what it could do. And we were I knew we were selecting a best in a class partner that was not only going to be able to allow us to automate, but it was going to most likely provide significant savings to us, which I’ll talk about in just a minute. And it also allowed us to set what we felt was a very aggressive success measure to communicate to our executives, as this was going to be the first part object that we’re starting off, this was really the first automation project, if you will, for shared services, and the new organization that that, that the executive team had invested in. And then we wanted to make sure that we’re going to be successful at the end of this, that we would gain that confidence to keep that investment coming in and be able to continue down our journey of what we plan to build out. And then we felt that the Cash Applications process would also from an internal resource standpoint, would require less resources, so we didn’t feel like it was too heavy on IT resources. So I didn’t need to go ask for 15 different people, just give me one or two, and we and we can go knock this out. So it was a low cost internally as well. Alright, some of the challenges that we wanted to focus on in the project. One, of course, again, was the low Cash Posting rate. Again, it was 40%. So our target was 80%. So we wanted 100% increase by executing this project in our automated cashouts, and that’s unattended, true, no-touch. The team knows I’m very adamant on that. I want anybody touching anything, I want to see 80% And I want the machine to do it all. It was going to eliminate the manual coding. So I’ll talk a little bit more about that, on how we set up how we saw hire radius help us in that area. Going to provide us visibility, real-time visibility, as as the team is doing the exception handling, what are pre What are pre-auto-post rate was and post-exception handling rate was, and then the North America team an added benefit that we got from it. They’re also responsible for nontrade AR transactions. So we have a number of buildings where we have tenants, so we have rent payments coming in, and other items like that, that team is also tasked with having to apply those manually, which are sometimes much harder than the trade AR payments. So even though the tool is not built for that, hardiest doesn’t advertise that, but we saw a way to leverage that. So HighRadius. So again, I had prior experience with it, but we wanted to make sure that we’re focused on it as we build out our tech stack. For our global shared services organization, we’re gonna make sure we’re focused on best in class, as I communicated to the HighRadius and all of our vendors, we’re looking for long term partners, we have a long term plan to 2025, I’m looking for an organization that wants to one help us initially automate it. But that is just phase one for us, we’re gonna come back to this after we get through all these 11 projects, and then our process and our continuous improvement is going to start and we want to partner that’s going to be there, we want to an organization that’s going to continually be developing their tool, which already has does. And I’ll talk a little bit more about that. As a community, for those of you that are not hiring as clients, you may not know this, for those of you who are like Larry out here who I’ve worked with before, it’s a really cool network. And a lot of people say everybody, but a lot of people really like to talk about the tool, and we exchange ideas and how it works, what it could do better. And you got these super-smart people at HighRadius, you’re who are sitting back there or in Houston in India, working on the next two versions of how they’re going to improve this, then they’re also listening to us and listening to our feedback and say, hey, we’d like it to do this, or what if you guys could do this. And they’re taking that feedback, and they’re actually doing it. And I was outside. So I implemented how radius another company I’m doing again now. And just in those two years when I was away, I just saw a ton of improvement in the project. And it’s amazing, a lot of development of what these guys are coming up with that. It’s very exciting. And that’s another one that’s just going to help us out as we continue to focus on continuous improvement. We know we have a long-term partner that’s focused on the same thing. 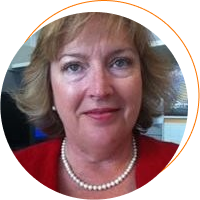 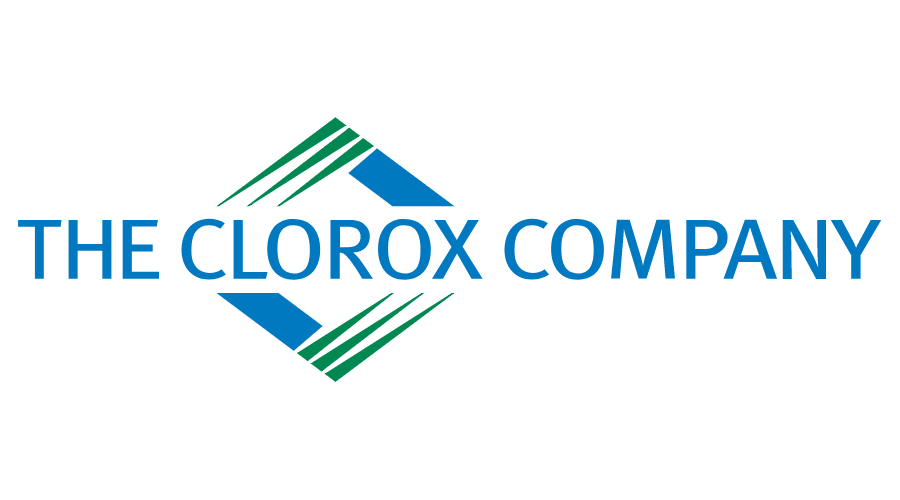 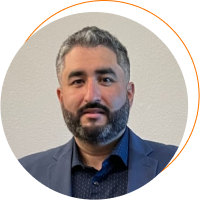 Please fill in to watch the video

We use cookies on this site to enhance your user experience. By clicking the Accept button, you agree to us doing so. For more info, refer to our privacy policy.
Reject All Accept
Manage consent