AI in Accounting - Reality or Marketing?

While AI has extraordinary capabilities, it also has some limitations and hence cannot be introduced to everything with the hope that it will make all problems go away. Learn about the real use cases of AI in Accounting, including the ones involving potentially missed transactions, and understand how AI can enable a smoother and more accurate month-end process.
WATCH NOW 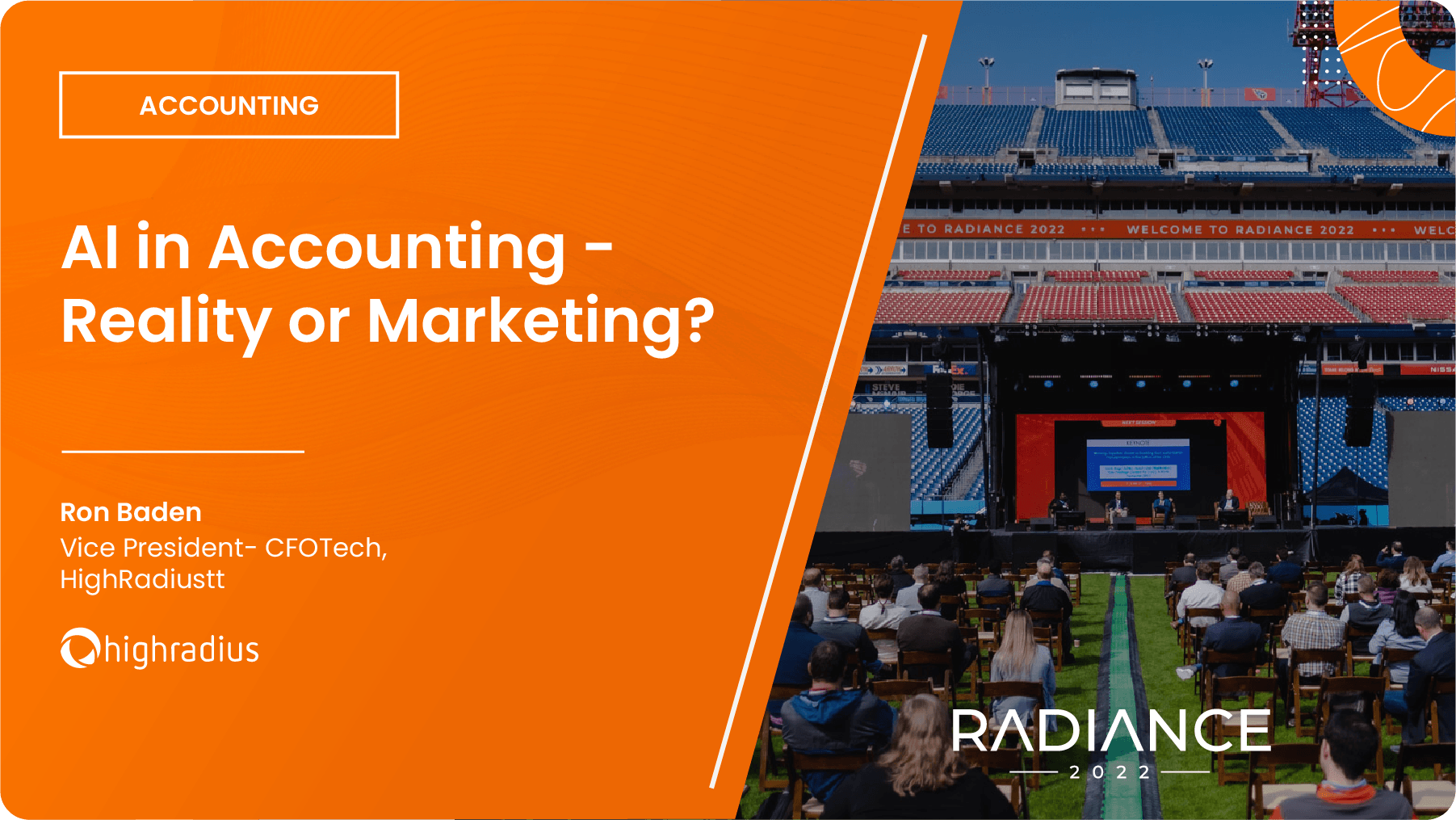 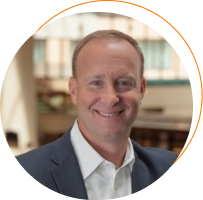 [02:27]
Click to listen
Takeaway 2
Learn how AI can enable a smoother and more accurate month-end process

[09:57]
Click to listen
Takeaway 3
Learn if AI in Accounting is the real deal or just another hype created by Marketers with customer successes stories

Rick [00:05]
So we’re going to get started. Thanks for coming here today. This is AI in accounting, reality or marketing and just some housekeeping stuff. First, the sessions 30 minutes and the first 18 minutes of presentation, and then we’re open it up to questions. And that’s kind of the TED talk layout that we’re doing. Secondly, if you’ll check in on the Bizabo app and say you’re here, then they’ll send you all the material for today. And third is our presenter, Ron Baden. Ron is the vice president of CFO Tech at High Radius, which autonomous accounting is part of. And Ron started his career as an accountant, so he was one of us. And then he moved to consulting and then he moved to sales. And then he was CEO of a software as a service vendor in the IPM area in enterprise performance management. So statutory financial consolidation and planning. And I can’t think of a better person to do the presentation today on AI and accounting, marketing, our reality.

Freeda Video [07:25]
Freeda. What do we have for today? I’ve updated your work list with four anomalous transactions totaling $792,457. Do you want to start with the first line item? Sure. The debit has posted incorrectly to software expenses and should be moved to the prepaid expense account instead. Should I create a task for this anomaly? Yes. Assign it to me. I have added the task to the October 2025 closed project. Do you want to open this task? Sure. Let me quickly review the suggested journal entry.

Audience [21:16]
Yeah you know, you should that subject to future collections. Yeah. You have the exceptions highlighted. So what’s the challenge that is in the collections? I’m just curious as to why the technology is not what it is.

Ron Baden [21:34]
Yeah, it’s it’s very close. We just haven’t programed it for things like, like for example, the anomalies engine does things like somebody booked an entry and it should be like prepaid expense and they booked it to software expense. We just haven’t told it yet that that’s an anomaly like that’s wrong booking. So it is they, that’s why I said they both actually do exist but it’s the coaching for it. So they didn’t understand exactly what to do on the general ledger that allows it to go fix those entries.

Audience [22:05]
And then and then blockchain. Is that anywhere you guys in the back of your mind?

Ron Baden [22:11]
It definitely is. Yeah. I’m glad the guy stopped recording for this part of the of the discussion. No, no, no. So blockchain is right. I mean, it’s the technology that’s going to allow these transactions to happen digitally and at speed. We found a couple of use cases like shockingly, the use case of converting Excel formulas for huge data sets is a great example of where to apply blockchain. We just haven’t found the technology we want to work with yet. So but it is I mean, I’ve heard a number of discussions. We just haven’t really picked the right spot yet for us to apply it.

Audience [22:56]
Is that just looking back through history to see. All these different types of entry point for months, etc.. You actually got to tell it, you know, as we go through this, as you’re going through all this, right?

Ron Baden [23:08]
Yep. So it happens in three ways. The first way is we tell it, we have a bunch of templates that we’ve built that we tell it what it should be, right? So basic accounting rules and it’s about prepaid expenses and accruals and things like that. Then we actually take the rules from our customers. So they give us a list and say, if this happens, do it this way. And we take that and we apply that as a template. And then we take those and we go learn. So we like to get 24 months of data is the right number. Anything after six months is too little. So 6 to 24 is the right number. But we can learn all of the data and all of the things that are happening in that 24 month period. So that’s actually how we apply it and get it to know your specific goal, your structure. The thing that we’re actually working on that’s going to be a little bit more interesting is the ability to train the humans who’ve made the mistakes once. So think of someone who’s sitting. I know it’s a but, but that’s where we’re actually headed, is to say, this person keeps doing this thing, call it an AP invoice. We keep looking at it and correcting it. How do we tell them and get that behavior to change so that they actually stop doing it? And that’s the part that we’re working on. We already built out the can we reported. Can we auto correct it? Can we do the digital binder? Can we make the entry in your general ledger? Can we do both sides of it so that it’s trackable? Give it to the auditors. That part’s all done. The part we’re trying to figure out is how do we enhance the experience for the user who doesn’t want to code it wrong, right. Doesn’t want to spend 30 days making mistakes in the general ledger. So that’s the part we’re extending it to. Yeah.

Audience [24:53]
Love the way that you break that down to the three different stages of. What percentage of your automation are you actually? As you go from the stage one to stage two? Yep. Yep.

Ron Baden [25:11]
So we ran it for one of our enterprise customers. And I’m not going to say the name because the date is rather embarrassing, but we did it for 24 months for companies, 500,000 transactions a month. At post closed data, we found 5000 anomalies still after they were closing. So we’re getting about 80 to 85% once we do the learning in automation. So of the transactions that they never needed to look at again, we were able to correct 80% of them. Those 5000 after now that we learned them and we templates system we’re getting into the low 90% range. So their close went from 15 days to seven and all seven days are high value tasks.

Audience [25:56]
So where’s the theory would be that it would be a further.

Audience [26:03]
It sounds like you’re hitting a point, but then it’s more of cracked. Goes off first as well as quickly.

Ron Baden [26:14]
That’s right. Yep. Yep. Yep. And it actually we’re it’s yeah. I mean, we know the girls like I mean, that’s one of the interesting things that I really liked about what we did is we had the integrations from the other product line, so we were able to leverage them, right? So we had all the girls, lots of the banks, and so we were able to leverage those integrations to make it a much faster implementation and and deployment. So we have lots of customers who are doing nothing but buying the anomalies engine to just make their GL perfect. All right. So just think about, you know, being able at the end of the month to say, I’m certifying and I know these transactions are done and we’ll just work on the high value tasks from the from the GL. So it’s a really interesting way to add automation and add some air, but I like the automation aspect first because you can templates, then you know that you’re looking for the right transactions and then it finds the other ones. So. Any other questions? I can bribe you with more gift cards. 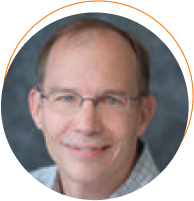 Please fill in to watch the video